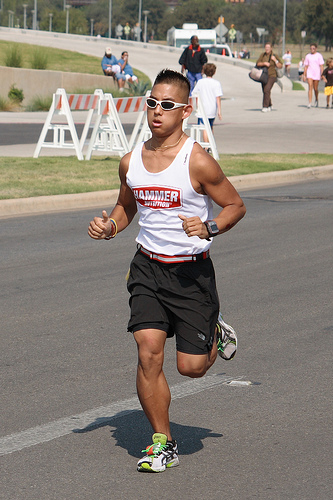 CH:  How long have you been a member at Castle Hill? EC:  I actually joined Timberline Fitness in 2001 before heading off to college.  I’d come home and workout during summer and winter breaks – by now Paolo had opened The Castle – but I didn’t start working out regularly until moving back to Austin in 2006. What changes have you made with your Health & Fitness Lifestyle since returning to Castle Hill? When I returned to The Castle I weighed in at 160 which I thought was normal with a routine consisting of lifting, rowing, and hitting the treadmill.  I dropped down to 145 and felt great, but later that year I broke my foot.  When the foot finally healed, I was back at 160, but now a knee injury that I’d suffered in high school had resurfaced making it difficult to run. Jerry Gerlich suggested that I spend more time on the bike, but my form was horrible.  He then convinced me to take his spin class and after one class I was hooked!  I was so addicted that I traded in Friday Happy Hour with my friends for Happy Hour Spin with Amy McNair Rogers.  I learned how to focus on engaging different muscle groups and over time I was able to run again without any knee problems. At this point I was mature enough to make a conscious decision about my nutrition and eating habits, I’d enter a race every month, but for whatever reason I only did my run training on the treadmill.  This drove Hilary Allison Chung nuts because I’d seriously run up to 10 miles inside.  One day I agreed to run Lady Bird Lake with her and we started running outside consistently.  Later, an all-levels weekly run group formed which was not only a great workout, but a lot of fun as well.  Our favorite route was “The Rainbow Hill Run” and I started getting really fast on the hills (go figure). By 2008 I had plateaued at 140 and wanted to get leaner, but had no idea how to lose the weight.  REI hosted a pre-Danskin seminar and since I was helping with event setup, I stood at the back and listened.  What intrigued me most was Sally Edwards discussing heart rate and zone training.  A few weeks later I saw a flyer that Jessica Wurtzebach was offering a sub-max testing session at The Castle.  I attended and my mind was blown!  Jerry later did a “Riding the Edge” workshop and my speed and endurance improved dramatically. So now a few years removed from college I was no longer eating fast food for every meal and drinking every night.  I’d gained the mentality that you never regret getting in a workout and that heart zone training was amazing.  I’d also started incorporating Trigger Point Therapy and believing in compression technology.  I’d just finished 18th overall in the Austin Triathlon sprint and I was eager to find out just how far I’d come.  On September 17, 2008 I stepped inside the Bod Pod and weighed in at 124.7! I’m not going to lie, I’ve experienced ups and downs ever since.  In the past 2 years I’ve had 3 MRIs because of a torn calf, a torn shoulder, and am currently recovering from a herniated disc in my neck.  It’s been tough, but the bottom line is that I don’t want to be confined to the endurance athlete’s underworld.  So before I age up to 30-34, the reason I’m “training” is to make a “leave no doubt” comeback! What is your favorite class/instructor? I’ve had a great experience with every workshop or class I’ve ever taken, but I like I said, I absolutely love the cycling classes.  I build at least two sessions a week into my regular training program.  Monday Night Spin with Erin Truslow has become my cornerstone workout and believe it or not, I’ve missed less than a dozen classes for non-schedule conflicting reasons in the past five years.  She now requires prior notification if I won’t be in class. What is your favorite piece of fitness equipment and why? The official name for it is the Panasonic Core Trainer, but I call it The Urban Cowboy.  It’s that saddle looking machine with stirrups in the stretch room.  Have you ever seen a bull rider with bad abs?  One of the items on my bucket list is to be a Mutton Bustin’ Champion so I figure 15 minutes on The Urban Cowboy each day is a good way to get started. What motivates you to keep on track? My Big Pistachio teammates.  You know them as the CH cycling instructor trio of Erin Truslow, David Garza, and Adam “The Beast” Reardon as well as the big-watt masher in spin class, Kevin Shuvalov (KShuv).  Every time I’ve fallen, they’ve been there to pick me back up.  Erin constantly asks me the question “What are you training for?”  She more or less demands an answer then tells me to stop lolly-gagging and get after it.  In addition to forcing me to smile, David’s ability to “Inspire by Example” makes me remember the Golden and Platinum Rules of fitness which are “Be Great” and “Have Fun.”  The Beast is an empathetic and brilliant coach and always offers strategies or tweaks on how to make my training more efficient.  And KShuv keeps me honest.  We push and challenge each other in class.  I can keep up in terms of cadence, but I can’t match his speed or power. What have been the biggest obstacles with fitness? Definitely recovery.  I’ve been known to abuse my body, i.e. all the injuries, and not give it enough rest.  A few years ago I was training so hard that Amy took notice and stepped in for a “FITervention.”  She banned me from any form of cardio on Sundays and even said that if she found out I was doing anything other than yoga that she was going to come down to the club and kick my @$$!  So even now for events Le Tour de France Challenge or the Livestrong Spin-A-Thon, I have to ask permission to participate. What are you most proud of? I’m most proud of something I didn’t accomplish, but something I had a small hand in influencing.  We don’t compete with each other, but it’s awesome and remarkably humbling.  As long as I can remember, The Castle’s sponsored a number of fitness challenges and this past year I convinced my dad, David Cohen, to sign up for the 45-Day Cardio Challenge.  I’d check in at the front desk and the staff would tell me that Dad had already been at the gym.  I’d walk down the hall to the locker room and Dad’s friends, especially Michael Kentor, would give me a good ribbing that he was currently in the cardio room or had already come and gone and that I was late.  I’d walk into the spin room and Dad was already on a bike.  After 2 weeks I dropped off the leader board, but when the challenge ended and the results posted, Dad had finished in the Top 5.  He won a t-shirt, prize pack, and a massage.  I was so proud of him! What’s your greatest health & fitness achievement? I had a good distance racing season in 2008, but was nervous about aging up in 2009 to 25-29 because those fellas took their training really seriously.  I didn’t have the faith that I’d be able to compete so to prepare for the 2009 Austin Distance Challenge I hired a marathon training coach.  For those of you who’ve ever run the Decker Half Marathon, you know how tough that race is because of the hills and especially because of “Heartbreak Hill” at Mile 10.  At race start it was barely above freezing and to make it worse, it was raining.  I still don’t know where I found the mental toughness, but I finished in the Top 50 out of 800 racers and took 3rd in my age group. Are there areas that you are still working on? Since I don’t have a particular race I’m currently training for, saying that I’m working on improving my strength, endurance, and overall conditioning is only a half truth.  The other half is that I’m training to look good naked! When you’re not working out at Castle Hill what do you do? I’m the Austin Market Sales & Product Expert for REI which is ironic since The Castle’s the original location of the first Austin REI store.  It’s as if it was meant to be.  Working for REI’s my big boy job, but my fun job is being the Racing Team Director of Big Pistachio. Any thoughts you can leave us with? No matter what you’re training for or what your fitness goals are the very best advice I can give is to GO BIG, then surround yourself with those who believe in you.  Their love, support, and encouragement is absolutely priceless.  I’ve met those people within this wonderful community that is The Castle.  My experience has truly been life changing.  Thank you Castle Hill… for everything! Eli, Thanks for sharing this with us. Congrats on all of your successes no matter how small they may have been.

You are an inspiration at the Castle. I love seeing you here so consistently; your smile is contagious! And no body rides the Urban Cowboy as gracefully as you! Congrats on all your past successes and the many more ahead.