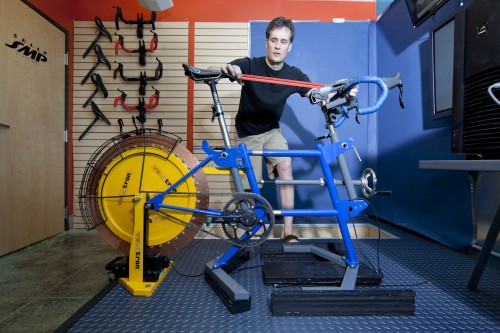 Hello. I’m Jerry Gerlich and I perform bicycle fittings, threshold tests and cover the majority of the sales chores for Castle Hill Cycles in Austin, Texas. My schedule also involves working with gym clients through our state-of-the-art facility, Castle Hill Fitness. I have a bachelor’s degree in Kinesiology from the Universityof Texas in Austin as well as certifications through the American Council on Exercise, the CHEK Institute, Power Plate USA, Sally Edwards Heart Zones Training, Personal Training on the Net and Trigger Point Performance Therapy. My wife, Kelly, and I enjoy the awesome social and physical environment that is Austin, with our boys, Charles and Jackson.

My entry into the bicycle industry happened abruptly in May of 1988. I was attending a music school in Los Angeles in an attempt to make a living as a professional drummer. Jaime Isaacks, whom I was rooming with at the time, rang me at around 11:00 a.m on a Saturday morning with a plea that I come to the bike shop at which he was working immediately. Apparently, one employee quit the night before and another was fired on the spot for stealing, which left Jaime in a bind. He needed a warm body he could trust to answer the phone and make sure products were not walking out the door free of charge. My roughly six hours of work were rewarded with a fast food lunch from across the street. Essentially, I was conscripted into the retail bicycle industry.

By late 1990, I was working at a second store in L.A., I. Martin Imports, as the first store had been sold, dissolving my assistant manager position. Roderick Gilchrist, the manager, had a huge impact on me as a fitter. He was a smart Scotsman with extensive experience in the retail industry. Rod encouraged me to pay attention, ask questions and when in doubt…….ask more questions. He also gave me my first set of stationary rollers to help straighten out my line on the road. I began tagging along on Rod’s sessions because I found them fascinating. We used the typical “Fit Kit” protocol, which I thought was a scientific breakthrough, at least at that time. One day, a client came in when Rod wasn’t around and I was thrown to the “fitting sharks.” The client was leaving town that afternoon with a Campagnolo C-Record equipped, limited edition Cinelli with a matching, hollow, proprietary binder bolt. Like the music business, there is always a first show where not everything goes to plan. The actual fitting went pretty well, but when we decided to tweak the saddle height one last time, it happened. The 5mm key was turning, turning, turning and suddenly…POP! I over tightened and snapped the proprietary, nothing else will fit binder bolt. We ended up discounting the bike by $400.00 to make up for the bolt. Welcome to the world of light weight parts. Now, get a torque wrench!

Previously, while attending music school, I had the honor of studying under several instructors who would inadvertently impact my bike fitting skills. One of those was Doane Perry, the current drummer for the rock group Jethro Tull. Doane helped to simplify/stabilize my drumming techniques. His suggestion to “never work any harder than needed” carried over into the Velotron fitting lab as well as the gym. Essentially, I look for ways to increase efficiency by reducing watts for the same speed.

Our fearless leader at The Castle, Paolo Minissi, has provided me with a Racermate Velotron which we have mated to a Mikkelsen sizing frame as well as other quality fitting and repair tools. The Velotron is a true watts meter that samples data every 7.5 degrees of rotation compared to 15 degrees of rotation provided by the Racermate Computrainer. The Velotron is the gold standard for data capture with regard to speed, watts, Spinscan analysis and torque angles.

Essentially, I start a session by having the client warm up on a Total Gym type leg sled that requires a squatting type movement under a very low load, maybe 10-15% of the client’s weight. While the client it warming up for 15-20 minutes, I make note of his/her current position measurements. I then load the current position onto the Velotron as closely as possible for a 5-minute baseline test. We choose a gear and rpm that requires ample effort without losing upper-body stability.

Once we have the baseline test, the fun begins in the gym. We test mobility, stability and balance in several different ways. I also have the clients perform a few rotation activities on a stability ball to check seated-proprioception. When appropriate, I utilize a Power Plate vibration trainer to increase flexibility, inversion tables to open up the low back and Pilates equipment for basic core work. Once I have an idea as to which muscles are firing, I head toward to opposing muscle groups to wake them up. With the smart phone, we can take before/after photos to see if my suggested activities have produced change.

Once all of the physical cylinders are firing, we do an initial cleat setting and run another Velotron test and compare the data. That’s where time starts to evaporate. Each adjustment is followed by a 3-5 minute test.

We adjust, test, analyze, adjust, test, analyze until the efficiency is as high as possible which usually results in lower watts for the same distance. We start with the cleats (sometimes up to an hour on this factor), then work out a saddle position that places the sits bones in the sweet spot of the saddle as squarely as possible with enough height without rocking. Sometimes, the current saddle just does not work which is when we start experimenting with saddles (most often SMP’s). Once we have a saddle position, we organize the bars in a manner to suit his/her needs.

We have cameras mounted on the ceiling for both the Velotron and the client’s bike which is set up in a stationary trainer. The cameras are there to provide the client with views not possible while cycling. They are not used as motion capture devices to determine joint angles. I also move around with the smart phone to capture footage that can be replayed immediately as well as emailed.

As the years progress, I have found that rules, technology and fitting “gadgets” tend to blur things. My approach is simple. I have the client thoroughly warm up and then operate in his / her current position under a decent load and watch mostly the feet, knees, hips and back. The tricky part is determining how to spread the workload by providing a position with good leverage and above all, comfort.

Hello,
I am trying to schedule an appointment with Jerry.

Any numbers to call him.

How do I schedule a biking fitting

Hi Bonnie,
You can either schedule a Bike Fitting with Jerry online by clicking this link, or you can schedule by phone at 512-478-4567 (dial 1). Thanks!