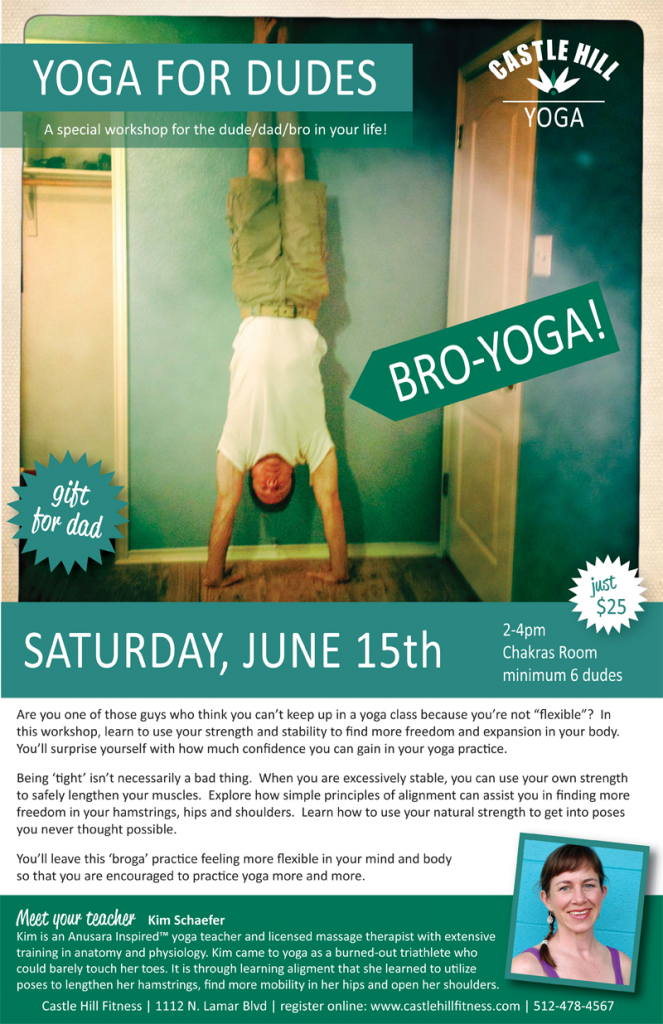 Yoga is not about being bendy. Can’t touch your toes with your legs straight? I’ve been there. Those of us in the tight hamstring club actually have an advantage. Sounds crazy right? Truth is, the tight-in-body are less likely to get injured in a yoga class and more likely to witness vast improvements in poses than our bendy brothers and sisters. Here’s why: we get to use the strength in one group of muscles to help us find length (yes, flexibility) in other groups. Similar to any sport that you practice, over time, consistency in the physical yoga practice yields improvements. (Your toes aren’t quite as far away as they were the first time you tried to touch them.) That age-old excuse that yoga is for flexible people just doesn’t hold water anymore.

Join Kim in her upcoming Yoga for Dudes Workshop on Saturday, June 16th While we’re shattering myths: Yoga isn’t effective because it’s relaxing. Rather, the physical practice of yoga works because it’s stressful. That’s right–practicing yoga postures puts physical stress on your body, and your body has to adapt–just like it has to do with any physical exercise. What sets yoga apart is that you learn to breathe through the uncomfortable moments. Just when you think you can’t hold a pose any longer, you’re about to tumble off the mat in a pile of limbs, you take another breath, and another, and slowly come out of the pose. The energy, or prana, that courses through your body can be a little addictive, like endorphins being released after a long run. Here’s the dig: the way you learn to deal with the stress during a yoga practice carries out of the yoga room and into your daily life. A big deadline comes up or your boss piles an extra load of work on you at 4:55 pm, and instead of clenching your jaw or getting angry, you remember to breathe and to soften. You remember that this, like the difficult yoga pose, will pass. To learn more about Kim, visit her website at www.purebalanceaustin.com
1 Comment
Oldest
Newest Most Voted
Inline Feedbacks
View all comments

Great explanation, Kim!!! So guys – Before I started yoga, I was a gym rat: I was doing aerobics and weight training 2-3 hours a day pretty much every day. I tried yoga to heal a specific injury, and for 18mo, I got my butt kicked every time I walked into a class – sweat dripping, muscles shaking, and amazed at how hard it was to make simple shapes with my body and breathe at the same time. Over time I figured it out & learned how to stop using my strength against me & start using it to help… Read more »