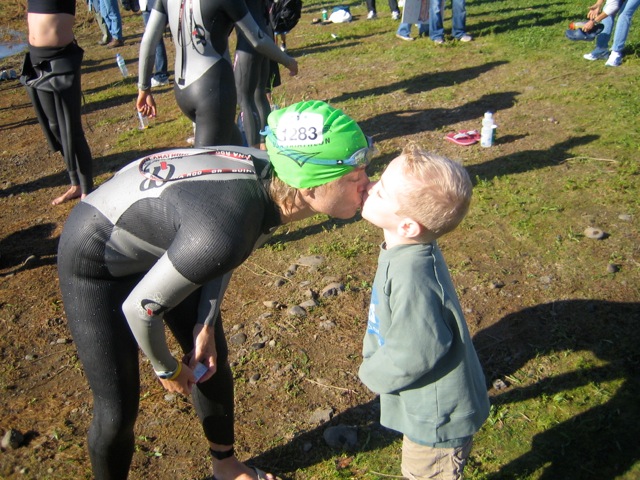 A lot has changed since the 1st few months of my participation in the Triathlon.  Learning how to race has mostly been from making mistakes along the way.  Coaches are fantastic for bringing out your full potential and helping get you race healthy.  Some things though are best learned by trial and error.  I make it a point to share with others my missteps so they won’t have the same frustrations I did, keeping in mind there are always new missteps to be had.

Like the time when I dropped (unknowingly) a staple from the race packet into my running shoe. This does not seem like a big deal; until you are 1/2 way through the run on a sprint race and you can’t figure out what is “stinging” your toe.  I had to stop, take off my shoe to locate this staple implanted deep into my big toe; this was big deal and ate up a lot of time. I will never open my race packet over a pair of shoes again; lesson learned. While racing in the Vineman Half Ironman I found myself racking my bike at someone else’s Transition area and starting to put on their shoes, before I realized these are not my shoes! I totally blame this on race delirium.  To fix this I created a specific ritual that I run through at every race to help remember exactly where my Transition area is. At a more recent race, I slipped my cycling shoes on in the Transition area and ran with them on to the bike mounting line.  On this day the ground was very muddy and wet from the previous day’s rain. The mud impacted in my cleats and I could not clip into my pedals.  For the next 4 miles I banged my shoes against the pedal, and kept reaching down trying to scrap the mud out with my finger and spitting water on my hands to wash it ….all the while riding at 20 mph.  Eventually I stopped, got off the bike, removed the mud and got back on the bike.  This cost me 1st place in my Age Group, which taught me to leave the shoes on the bike and to get into them while I am riding. Upon moving to Austin in 2006, I went in search of a Personal Trainer and Coach.  I found Shawn Bostad over at Pure Austin Quarry Lake.  The first thing I said to Shawn was “I want to qualify and go to the National Olympic Distance Triathlon Championships.” Shawn is a great coach and just what I needed.  After 6 months of training I qualified for the National Olympic Distance Triathlon Championships on my first race, with a 1st place win at the Galveston Lonestar Triathlon Sprint distance.  Mission accomplished, or so I thought… After qualifying I fell off the training schedule a bit, and tried to pick up the training pace when the race came near.  I felt pretty good heading out to Portland Oregon at Hagg Lake for the race and looking forward to a super fun race.  I had been training in Austin for God’s Sake… Austin Texas is the home of dozens of professional athletes and super star triathletes; I felt I had this in the bag.  This was the biggest race I had ever been in, there were a few thousand people, huge finish lines, and TV crews, and I was even interviewed and made the race DVD.  On race morning I was lining up on the water’s edge of Hagg Lake trying to size everyone up- which you should know is impossible to actually gauge.  The gun went off and we began our 1500 meter swim. By the time I took my 2nd breathe and sighted ahead -I was already 10 meters behind my pack.  I laughed to myself and said “well, you better just have fun and enjoy this….these girls can swim!”  I realized before I got out of that water that I had not set my sights on the entire goal.  I wanted to “Qualify” and to “Go To” the race, I never said “I wanted to RACE” or “be competitive” at Nationals.  I now know to be VERY specific about what I am wishing for.  During the run about 1 mile from the finish line, I slowed down to a walk, tired, defeated, disappointed… and a woman coming up behind me, yelled out “Come on 40 (the age on my calf) don’t you quit, you have this!” That was exactly what I needed to get going again and cross that finish line with my head held high.  That was a tough lesson to learn, but I am so glad I did! I slowed down on my triathlon season after that race and just settled into a new routine. I moved into producing triathlons for a few years, which took me out of racing them. For every race I produced I felt a pang of sadness that I was not in the race.  Instinctually I knew I needed to get back into racing triathlons. Jack and Adams and High Five Events put on the Texas Triathlon Series every year.  The goal is to do all of 6 races and the person with the least amount of time on their record wins their age group.  Jack and Adams host a banquet dinner at the end of the season where the winner is announced.  No money is awarded only an elaborate trophy and you get bragging rights too. I had been hesitant to do this series because there are six races, a commitment to a strict healthy lifestyle, and to be a contender you have to participate in each one.  If you get injured or miss one race (for any reason), you are taken out of the running. This year the timing was finally right and I signed up for the Texas Tri Series.  I had one goal in mind, boldly declaring it to the race owner Jack Murry, “I am going to sign up for the Series and I am going to win my Age Group!” Jack told me the first two races I had completed this year (where I placed 1st in my Age Group) did not count.  Plus I would have to finish the season with the Half Iron distance race. (Insert sad trombone Taps like music here) What?!? I had to do the Half Ironman, I didn’t know that! This season I dedicated 100% of my focus and attention towards training.  Doing everything my coach Adam Reardon/Reardon Racing requested, including Yoga classes and Trigger Point Therapy sessions. My 1st event The Rookie Tri I took home 2nd to Rhonda Halliburton. This is the race where I got the mud stuck in my cycling shoes and I lost 2:05 minutes to Rhonda. With my competitive nature, I only dug deeper. The next race was Lake Pflugerville Triathlon and I took 1st place and took back 0.50 seconds, (Rhonda was still in first place for the series).  Our 3rd race was the Couples Triathlon and I beat Rhonda by 4:31 which gave me lead in the series, by very a slim margin.  I had a fantastic race that day and not only finished before Rhonda but also PR’d that race (had a personal record for that course). Our 4th race was Jacks Generic race and even though I beat Rhonda by just 2:30, the race was extremely close!  Rhonda crashed on her bike but was able to recover and nearly catch me during run! On our next race we had to move up from Sprint Distance races to the Olympic distance at the Tri Rock Triathlon.  I was very nervous for this race in early September.  The longer the bikes course the more competition Rhonda is and the higher the stakes. At the end of the race I had beaten Rhonda by 6 minutes, later learning that Rhonda had bike troubles. The final event of the season was The Kerrville Triathlon Festival on September 29-30th. This is a Half Ironman distance race which means 1.2 mile swim, 56 mile bike and 13.1 mile run.  If Rhonda has a perfect race she can make up a lot of time, on the 12 minute lead I have on her.  It would seem a 12 minute lead is fairly substantial…but in a race that will cover anywhere from 5 to 6 hours, realistically 12 minutes is nothing. These 6 races came down to this final 13.1 mile run.  I knew I had 12 minute lead on her in the Texas Tri Series, but I knew I could lose that if my run went bad.  I also really, really wanted to beat her in this race.  So I started to run as quick as I could, knowing I had to run “slow & steady” in order to not blow up. The course was a U shape 3 mile lap that we had to run 4 times.  This meant we saw our other competitors two times per lap. This was a good thing for me as I could keep an eye on where Rhonda was and if she was doing okay or picking up pace during the run.  So I ran…. and never looked back.  At the end of the day, I had a great race.   Coach Adam and I planned my race and raced my plan. I secured 2nd place in my age group which I never would have expected.  I finished the race just 1 minute and 50 seconds in front of Rhonda who was never able to close the gap.  I set my sights on a goal, to win my age group in the Texas Tri Series and I did it.  Wow! Erin kissing her son JD after a race

I am excited to be at a place in life where I have the space and time to train hard with a great coach, stay healthy, change the way my body looks and feels, and continue to enjoy my work, life, and being a mom.  I am in no way saying this life style is easy, because it is far from it. Waking up at 4:00 a.m. to go for runs with a head lamp on is not always fun, but this is a piece of the puzzle towards my goal.  I am able to do what it takes to make it happen, because this is what I want. I strive to continue to inspire my son, my students and clients to see that at any age, anyone can be fit and can accomplish personal fitness goals.  I began triathlon after my son was born and I was 36 years old.  Currently Jennifer Reinheart holds 1st place in the 50-54 age group and is kicking my butt.  What I am hoping is by the time I move into this age group, that I too can be fast like Jennifer! Read the final race report at: http://www.facebook.com/notes/erin-truslow/kerrville-triathlon-festival-race-report/10151939386670353

Erin is a certified personal trainer at Castle Hill with over 20 years of experience in the business. Erin has the ability to work with all fitness levels and goals, from the beginner to the endurance athlete. Erin particularly enjoys motivating people to try new things and to push past their preset “limits” of fitness and endurance. She loves getting people to their first starting line of a race of their choice. She can be reached at erin@castlehillfitness.com.
1 Comment
Oldest
Newest Most Voted
Inline Feedbacks
View all comments

Great story! Well written and the win so well deserved… Think I’ll take credit for your resilience…..genetics missed me by a mile, but tagged you!!!