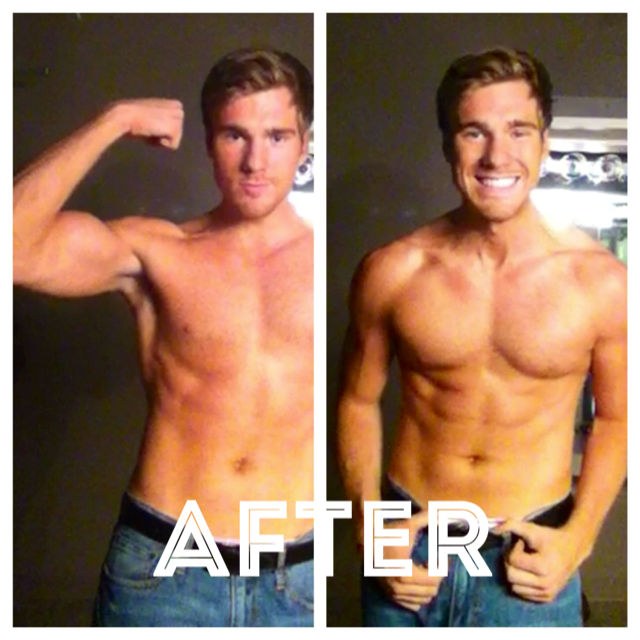 Over the past 3 months I have been watching the physical changes in Michael Glavan as he prepared for his role as Spike in Vanya and Sonia and Masha and Spike at the Zach Theater. He has been amazing to work with. He did everything I asked and more, from watching his diet, to adding in extra cardio on the weekends. The combination of Cardiovascular work with both light weight, high reps and heavy weights with low reps was exactly what he needed to make his body perfect for the part of Spike.

When I was first introduced to Michael via email through Castle Hill Fitness, I had him send some “before” pictures so I could see what I had to work with. At first I was not sure of how much muscle I could put on him in a safe way without having him get puffy. We had a good base, but needed to really work the Chest, Back, and Core for the stage. Fortunately, with this strong work ethic we were able to watch the weight, but get enough protein in without adding too much water weight and puff. I remember Michael mentioned that he was totally new to lifting weights and really didn’t know what to do. So I sent him a very detailed set of workouts to get him ready for the types of workouts we’d be doing here in Austin at Castle Hill Fitness. Having Michael start his program early was necessary, but difficult as I was not able to see his form or monitor his weight choices. Once he got to Austin I was able to turn up the heat and dial in some of his form. It is really incredible to see just how strong he is now and how much more weight he can lift. We also added in some of Robert Reed’s “boot camp” type classes twice a week and the occasional Yoga for Athletes class with Ari Witkin to help him stretch out and recover faster from the harder and heavier workouts. For fun on the weekends I would have him do a long run and get in a Kayak or Stand Up Paddle on the lake for his active recovery. I knew he would have fun doing those activities, but I also knew what an incredible core workout they would be. I am going to miss working with Michael now that he is going on to other parts and plays. But I know that he has learned a lot and can keep this new body going for a long time.

I just want to thank Michael for being on time for every workout and coming with a “can do” attitude. For proving to me that if you do everything I ask, it really does work and huge changes can be made in a short period of time. And for being awesome to work with, it’s been a fun 3 months.

Keep up the good work!

Michael is rock star and we will miss his smiles! Great job BOTH OF YOU!!