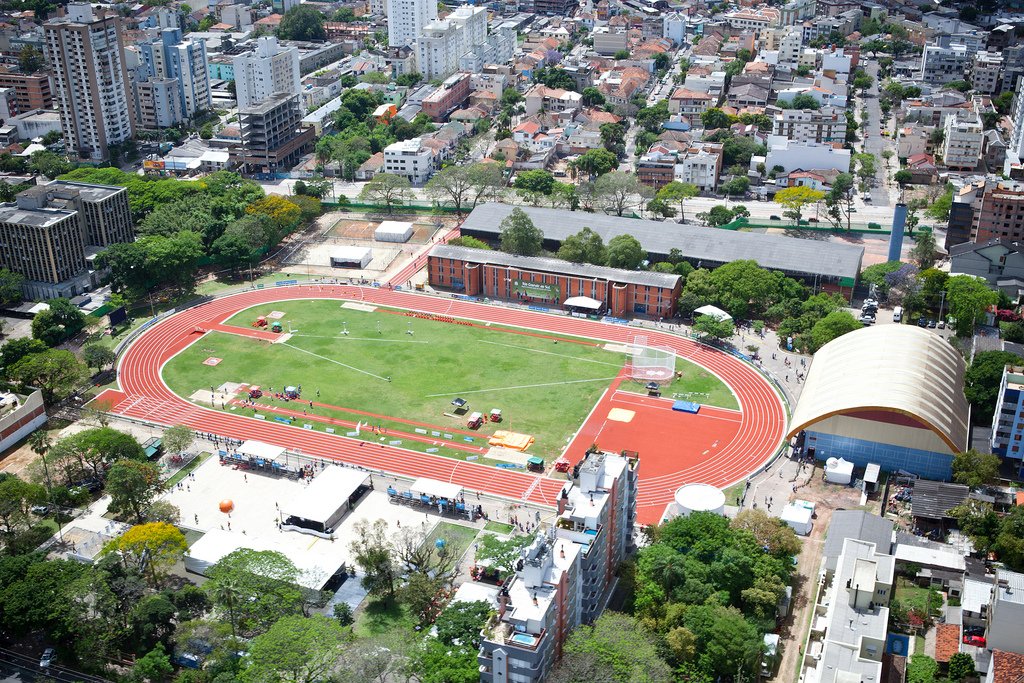 Cassandra Henkiel is now ranked 2nd in the world in the 5,000m (women 40-44). This is an image from the World Master’s T & F Champs held in Porto Alegre, southern Brazil.

“I have raced all over the world and it’s always interesting racing in a new country not knowing what to expect. Things operate differently everywhere even though you would think, racing is racing and that would be a universal language? The World Master’s T & F Champs is being held in Porto Alegre now (10/15-10-27), which is in southern Brazil. I arrived on 10/16 to race the 5,000m held on 10/18.

Some sight-seeing while in Brazil

Day One After checking into the hotel, arriving 2 hrs late…it was time to shake out the legs. Luckily the hotel was located near a park and that was the site of the cross country races. A very safe place to run during day light. Had no time to check in & get my race number, that would be day 2’s adventure. Day Two It was just that….an adventure! Thankfully there were other runners athletes staying at our hotel to give a little guidance. There were 5 different event locations spread out through the city. The main stadium was at least walking distance from our hotel, where we needed to check in. There, we got our race numbers, checked in & watched the utter chaos unfold with everyone in the same boat trying to figure out what line was for what & where to go. That was about a 4 hr process. Everyone (all the athletes) couldn’t have been nicer and just happy to be there. Pictures being taken with fellow athletes, making new friends whether you speak the same language or not….that’s the beauty of sport, we’re one in the same! Day Three Was race day. As with track meets, there’s a lot of waiting around for your event(s) over several days. I am just running the 5,000m, that’s it and it’s a final(no pre-lim’s or semi’s) The race was scheduled for 4:35pm. The event site was about a 30-40 min cab ride from the hotel. Making sure to arrive with plenty of time to get familiar with the lay out of the venue and where to execute your pre-race routine. Due to complications (the counting of athletes laps) with several other 5,000m races earlier that day…they were getting in about one 5,000m race every 45 mins’ish! I noticed there was no race clock anywhere to be had on the track? Hmmmm. As I stated earlier…ya never know what you get racing in other countries. After being very familiar with the venue feeling like it was my new home, my race was about to go off, about 2 hrs late. We were definitely beating daylight! I usually don’t wear a watch for any track race, though this one I did. Felt as though I would like to have some idea of my time/splits! There were about 3-4 women I’d be competing with in this race for top 3; gold, silver or bronze medal. Truly, until the race starts you never know how it’s going to unfold. The Race The pace went out uncomfortably slow and I ended up taking the lead after the 3rd lap(not my norm). There an Italian women kept on my back shoulder throughout the entire race & not knowing an Argentinean was hanging on to 3rd behind her. I kept pressing the pace with each lap, we dropped 3rd place with 1k to go and at the bell lap started pressing, though holding off my kick. Off the final turn into the finish, the Italian shot out from behind and I tried to challenge with whatever kick I had and just couldn’t muster that next gear to regain the lead and saw my 1st place run away from me. Post Race After the finish, which was about dark, there were lots of hugs, kisses on cheeks, high fives and photos being taken. Overall, I was happy with my race, my 2nd place and even with a slow time, it was a great racing experience. And from what I hear an exciting race to watch. Thankfully we finished right before dark, phew! Day Four It’s off to the airport first thing in the am. Time to travel around Brazil. Ciao!
2 Comments
Oldest
Newest Most Voted
Inline Feedbacks
View all comments

This is amazing and inspiring! Congrats Cassie!

Cassie, YOU are a TRUE PRO and super STAR!! Congratulations on your great adventure and a successful event. Thank you so much for sharing a slice of your life and being an inspiration.