I was introduced to Jerry Gerlich from Castle Hill Cycles last spring when he contacted me to discuss my blog post, “Fit Bike? Or Size Cycle?” Speaking with Jerry was a breath of fresh air. Apparently I am NOT the only person in our industry who feels technology is a misrepresented solution for bike fitting. Steve Hogg’s fitters are trained to conduct bike fittings using their eyes, confirming each adjustment neurologically with muscle testing protocols. We share a common belief that each client deserves a positive experience and outcome, supported by a money-back guarantee. 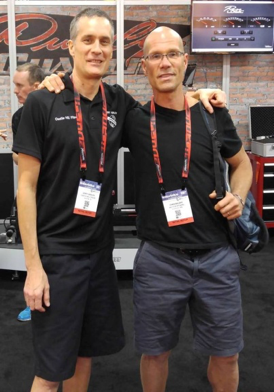 Several phone conversations later I found myself at Interbike with Jerry, Steve Hogg, Scherrit Knoesen, Colby Pearce and Mark Dwyer discussing bike fitting. Thoroughly impressed with these guys, I asked Jerry if he’d be willing to help me with my bike fit. We set the session for the first week in February.

I am not your typical cyclist. Eight-years into my mountain bike racing career I contracted Lyme disease, which was undiagnosed for 16-years. During that time I developed a neurological disease called Chronic Inflammatory Demyelinating Polyradiculoneuropathy, an inflammatory disorder that affects the peripheral nerves and the spinal nerve roots. This targets the large fibers on my left side, which are responsible for motor control and coordination. I’ve been struggling to ride a bike for over a decade, and decided Jerry was my best bet at making some improvements. FYI I’ve been “fitted” by a few of the “best” with minimal change to my overall experience. Off to Austin!

Day #1: Pre-fit postural, functional and breathing assessment with the talented Liz Hoffmaster
Jerry expected I’d be chock-full of adhesions and scar tissue from the Lyme, and arranged a 2-3hr session with physiotherapist extraordinaire, Liz Hoffmaster to get me sorted before the fitting. He was right.

Liz is the real-deal! I’ve seen dozens of physios, physical therapists, chiropractors, Rolfers, etc., but she made more improvements to my posture, symmetry and breathing function in three-hours than all these folks combined. Jerry attended the session and took notes to provide more information during his assessment and documented my homework from Liz. 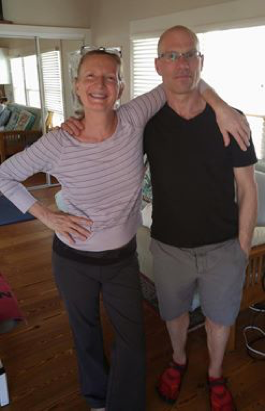 Day #2
Arrival and Assessment at the Castle
Castle Hill Cycles has provided Jerry with quality equipment and tooling, not to mention a tremendous fitness facility and instructors ranging from yoga to nutrition. After some “treats” at the Café, we were off to the fitting at about 10 AM.

I’m super grateful to Steve Hogg, who chimed in via a Skype video call during Jerry’s interview and proprioceptive assessment. That call is more evidence that these guys use teamwork to stay ahead of the curve with bike fitting.

What do I remember most from working with Steve? Jerry stepped out of the room to get me some water and Steve said, “There are few truly-talented people in the world, and very few of those people are exceptional.” You are to be among some of the best in that class, working with Jerry and Liz. 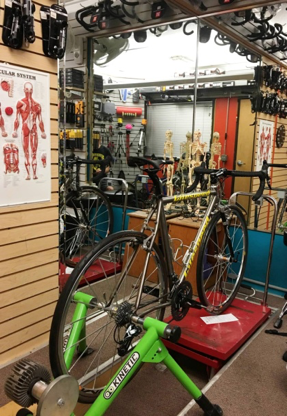 Here is my Litespeed CX bike on a Kurt Kinetic traditional trainer about to be marked and measured. The red jack under the front wheel allows Jerry to level the front end for measuring purposes and to simulate grades from -5% to +18%. He also uses a Kurt Kinetic Rock and Roll stationary trainer, a Mikkelsen fitting bike mated to a LeMond Revolution trainer and Kreitler rollers when appropriate.

Notice the “cut-out” in the floor under my bike? That is where the rollers will sit for my post fitting evaluation. Jerry also has clients ride outside when possible post fitting for real world feedback. That’s not hard given that Austin enjoys over 300 rideable days a year.

Like many athletes, my hip flexors, quadriceps and calves tend to get tight. Jerry took time to open up my hips and relax the upper/lower legs with a Power Plate vibration machine. He also stretched out the quads manually and had me engage the hamstrings/glutes with simple but effective standing and supine unilateral bridging activities he has developed through the years as personal trainer. This happened after Jerry’s thorough off the bike functional assessment. 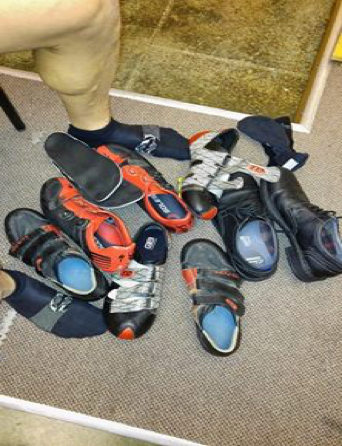 Time for the Feet and Shoes

Jerry said to bring road, mountain and street shoes. Steve Hogg’s guys employ techniques for modifying foot/shoe/pedal connections that are superior to anything I’ve seen in our industry. Much to my surprise, he methodically made some G8 2620 insoles feel better than my (expensive) custom orthotics!

Foot correction, including detailed work on footbeds, shimming and wedging is a major portion of Jerry’s actual fitting session. Many fitters gloss over cleat position and how/where to apply shimming and wedging, which is a big mistake in my opinion. Steve Hogg fitters employ several unique ways to optimize the foot in the shoes and the shoes on the pedals, including heel wedging, cleat wedging, forefoot posting, and shimming specific to .5mm to promote comfort, symmetry and function.

By using Steve’s patented proprioceptive testing techniques, Jerry pinpointed exactly where I needed subtle, but effective wedging. He also switched a minor amount of shimming from one foot to the other which at a gut level, I have known needed to happen for years. I didn’t make the change prior because I’d been told by “the best” that this correction was necessary for my condition. Sound familiar?

The exercises, stretches and adjustments made a huge difference in stability.

Jerry’s approach to my fitting was truly unique. Since he knew I had extensive experience riding stationary rollers, he used the Kreitlers for testing the symmetry and stability of my new position. The picture shows me pedaling on the rollers hands free with my dominant eye covered. Jerry unveils the most subtle (and not so subtle) stability-cues having clients function off the bike and cycle with the dominant eye covered. 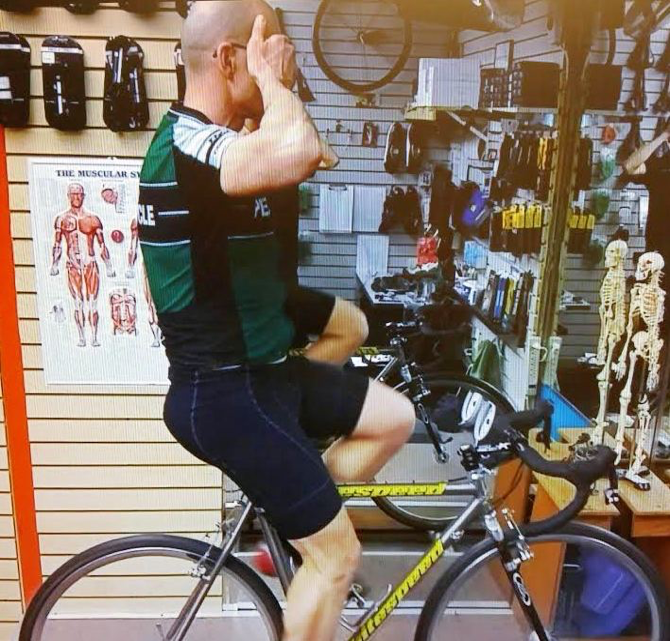 Rollers are an exceptional tool for identifying changes in symmetry and stability between and after adjustments. This is me riding smoothly with no hands, covering my dominant eye. Prior to the fitting, doing this would have probably landed me head-first into his wall or computer.

My homework included several weeks of providing feedback to monitor progress and emphasizing my experience on the road, not just the rollers. Jerry’s comprehensive fittings come with 90 days of free follow up consultation and adjustments.

The detailed bike position and functional notes provided a great road map for proceeding after the session. Jerry suggested I focus primarily on Liz’s breathing and postural activities and riding easy for the first few weeks post fitting so my symmetry changes would be more likely to stick long term. Although there have been a few minor setbacks, the changes to my body have been largely carrying over both in daily life and on the bike. At 6 weeks post fitting, I continue to see improvements in riding and overall function. Thanks to Liz, Jerry and Steve for the memorable and enlightening experiences.